For Woodward, artistic beauty isn’t merely a social construct. It is actually inherent in human nature. In fact, it is found within our DNA. The pull of beauty is eternal, and from the cave-dwellers of Lascaux, to the cliff-dwellers of Washington, people commune with nature via art. 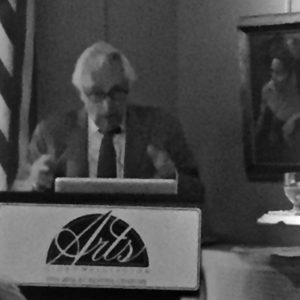 83-year old Washington artist William Woodward believes that the style in art comes from nature. He ties fractal geometry to painting, sculpture, and architecture, since the infinitely scalable spiral design of the nautilus shell can be found in the tail of St. George’s dragon, whether drawn by Durer, or painted by Raphael…or in Frank Lloyd Wright’s Guggenheim.

Woodward deals in detail with natural phenomena in his lecture, “The Nature of Style,” with an illustration of the importance of fractal geometry in biology, botany, zoology—as well as in art and architecture.

Although this sounds rather Romantic, Woodward is an academic painter and teacher, who emphasizes technical mastery, and has recreated Reubens’ and Titian’s techniques. He’s been teaching since 1977, and a recent exhibition of his students’ work at the Arts Club of Washington drew attention to his non-conformity with Modern and Post-Modern trends.

If the Washington Color School was a Modernist circle in the middle of the last century, “Legacy: William Woodward and Students, 1977-2005” offers an artistic alternative, featuring dozens of works by disciples across the decades who have established a subculture of realistic art in the nation’s capital.

Some of Woodward’s influence is due to his recognition of the importance of aesthetics in ordinary life.

He maintains a historical sensibility, while aware of the impact aesthetics may have on society today. For example, he blames Modernism for the devastation of the First and Second World Wars, because the inhumanity of the artistic style diminished respect for the humanity of individuals.

Another of Woodward’s insights is that human need for ornamentation is so strong that one way people may respond to the disappearance of ornamentation from clothing and architecture and modern art might be by displaying it on their bodies, as tattoos.

That is, the spider-web of lacework that once graced womens’ fashion—or 18th Century men’s clothing, for that matter—may have been replaced by the spider-web of tattoos inked upon the bodies of today’s millennials.

Since cheap Chinese clothing has little detail in comparison with dresses and suits from, say the 1950s, people must satisfy their lust for ornamentation by displaying it on their skin, instead of in the fabric they wear. Likewise, blank walls of modernist architecture provide a medium for graffiti artists to colorfully decorate what otherwise might be bare concrete.

In this way, what seems to be vandalism at first sight might be understood as a desperate response to aesthetic deprivation. Not my personal preference, but after hearing Woodward’s explanation, for the first time I thought I could begin to understand the nature of style.