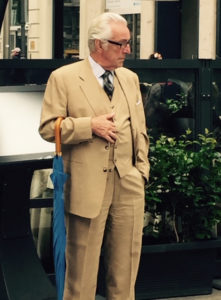 William Woodward, a third-generation native Washingtonian, is among America’s most sought-after and admired classically trained painters (the Florentine Accademia di Belli Arti, the Corcoran School, and The American University). The recipient of multiple awards and commissions, Woodward’s works have been acquired by museums, as well as scores of corporate, public and private collections. Woodward, as director of George Washington University’s MFA program in Studio Arts for more than thirty years, has mentored three generations of artists in the techniques of the great masters, and is a popular guest speaker at prestigious venues such as the National Gallery of Art and the Smithsonian Institution in Washington, DC.

Woodward has been called a “virtuoso, a painter’s painter” by Rafael Squirru, former Cultural Director of the Organization of American States. Benjamin Forgey, art critic of The Washington Post, observed, “ [Woodward’s] paintings are alive with knowledge, translated from eye to hand…. It’s really wonderful what he can do. His ability to draw, his feeling for the figure in space, his understanding of dramatic situations – his skills have kept developing in the 25 years that I’ve observed him.” The highly respected artist and TV commentator, Bill Dunlap, voiced the opinion of many fellow artists: “I admire him and think him the best pure painter of our generation!”

William Woodward was born in 1935 in Washington D.C., and earned his B.A. and M.A. degrees from The American University, studying with Ben Summerford, and part-time with the art historian Dr John Shapley at The Catholic University of America. He was subsequently awarded a two-year fellowship by The Leopold Shepp Foundation (1957-59) to study in Florence, Italy at the Accademia di Belli Arti, and became a scholar and frequent guest of the art connoisseur Bernard Berenson, at Villa I Tatti.

In Washington DC, as a young man, Woodward taught at The American University, the Sheridan School, the Madeira School, Saint Albans School, and the Corcoran School of Art. At present, he is Emeritus Professor of Fine Art at The George Washington University, where he was program director for the Master of Fine Arts (MFA) degree for 34 years (1969-2003).

Among his students are several generations of today’s noted contemporary artists including:

William Woodward is the only artist ever to design both the obverse and reverse of a United States coin, as winner of the invitational design competition for the silver dollar minted in 1989 by the U.S Treasury, commemorating the 200th anniversary of the U.S. Congress.

Among his other awards, in 1991, the Departement de Finistére (Brittany) awarded him First Prize in the Concours de la Peinture en Plein-Aire. In 1995; the Society of the Four Arts Museum in Palm Beach, FL awarded First Prize to his painting, Avarice, in the 49th Annual Exhibition of Contemporary American Art.

Notable among permanent museum collections, his work can be found in the National Gallery of Art, Corcoran Collection, Washington, DC; the John and Mable Ringling Museum, Sarasota, Florida; the Speed Museum, Lexington, Kentucky; The Huntington Library and Museum, San Marino, California; the Washington County Museum of Fine Arts, Hagerstown, Maryland; the Ogunquit Museum of Fine Arts, Ogunquit, Maine; and the Katzen Museum of Art of The American University, Washington, DC.

Woodward is an enthusiastic and popular “guest expert” at the National Gallery of Art in Washington, DC, giving lectures and demonstrations before live audiences, re-creating the painting techniques of Old Masters such as Titian and Peter Paul Rubens.

His recent presentations in public venues include: What the Walls Say: Murals from Prehistory to the Present, Smithsonian Associates Program, Washington, DC; Light and Color in Art, Smithsonian American Art Museum, Washington, DC; Painting The Greatest Show on Earth, Ringling Museum, Sarasota Florida; The Horse in Art: A History, Sporting Museum & Library, Middleburg, VA. Other topics include: Design, Form & Structure in Art and Nature; The Naked and the Nude; and numerous others.